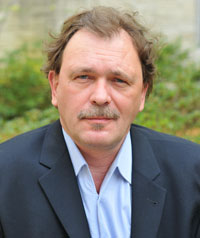 I was born and raised in Sankt Veit/Glan, a small city in Austria’s southern province of Carinthia that borders Italy and Slovenia.

For my undergraduate studies I attended the Karl-Franzens University in Graz, the capital of Austria’s province of Styria. I graduated with the Master of Arts degree with a major in philosophy and a minor in German philology.

In 1997 I enrolled in the philosophy program of the State University of New York at Albany to pursue my graduate studies. Subsequently, I received the degrees of Master of Arts and Doctor of Philosophy from SUNY at Albany.

I have published articles on correspondence and minimal theories of truth, on liar-like paradoxes related to metalanguage features, on grounding, on a rebuttal of Kripke’s argument for mind/body-dualism, on a modal version of the ontological argument for the existence of the Judeo-Muslim-Christian God, on skeptical theism, and on the idea of intentionality conceived as partial identity. Currently, I am working on a paper that summarizes my views on Paul Horwich’s minimal theories of truth and of the meaning of the predicate “true”.

Before coming to UNLV in 2017, I held visiting faculty positions at Bennington College (VT), at Siena College in Loudonville (NY), followed by a full-time Lecturer position at Washburn University in Topeka (KS). Here are the courses I taught so far:

I am pleased to serve as a member of the Executive Committee of The Mountain-Plains Philosophy Conference – which is perhaps best thought of as an “un-conference” (to quote our esteemed, retired member Harold Rood). Well, you check it out and judge!

Outside of academia, I love to spend some time with my cat – a true Kansan mountain lion aka “Monka”, “Mankale”, “Manikin”, or “Little Man”. Otherwise, I am mainly concerned with maintaining my moped which provides the daily commute to school and the casinos:)

Fill out the form below and you will hear from me shortly.